0
was successfully added to your cart.

Sometimes, when you least expect it, life will throw you some adversity. How you handle this adversity, will, in some way, shape or form add a positive, or implement a negative into your way of thinking. A Chance For change was born due to a number of both positive, and negative situations that ultimately shaped Co Founders Ivan and Sam into the two individuals that they are today. 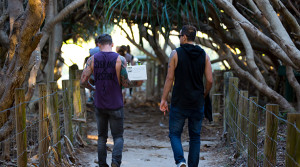 Having met in 2005, the boys were introduced with no idea of the brotherhood that would be forged over the next 11 years. As individuals they have extremely powerful stories, stories and upbringings that have ultimately laid the foundation for A Chance For Change to be built on.

Having both grown up in tough environments, and having faced many different challenges in there lives, the boys ultimately fell foul to the “Black Dog”

Two of the strongest of men on the outside, Ivan and Sam had fallen victim to a disease that seamlessly integrates itself into your mind. Without warning, without notice, and with a disturbingly silent ring, that only sounds when it’s too late.

As time went on, we were constantly in a battle with our minds, a battle that is very rarely won, but very easily lost. A time when talking to anyone was out of the question, why? Because we are men right? We could see, as plain as day that being a bloke and talking about how we feel was not on the cards. As time went on we managed to get on top of it. Then it started, young men, our mates, our mates, mates, started taking their own lives, Men with kids, families friends had reached a point where they thought they couldn’t go on any longer. Being affected by way to many suicides and having been there our self, out of love for our mates, A Chance For Change was born, an idea that sparked an unrelenting passion to make a change, to help men in there fight against the black dog and to help those suffering understand that there is help! That people care! That you are loved! That no matter how hard it gets no matter how far you fall, suicide is not the answer, and that speaking up doesn’t make you less of a man, in fact in makes you more of a man!

Join our fight and through collaboration, community awareness and uniting as a nation, we will see a change that is unparalleled in recent times. With your support, we have a chance for change.